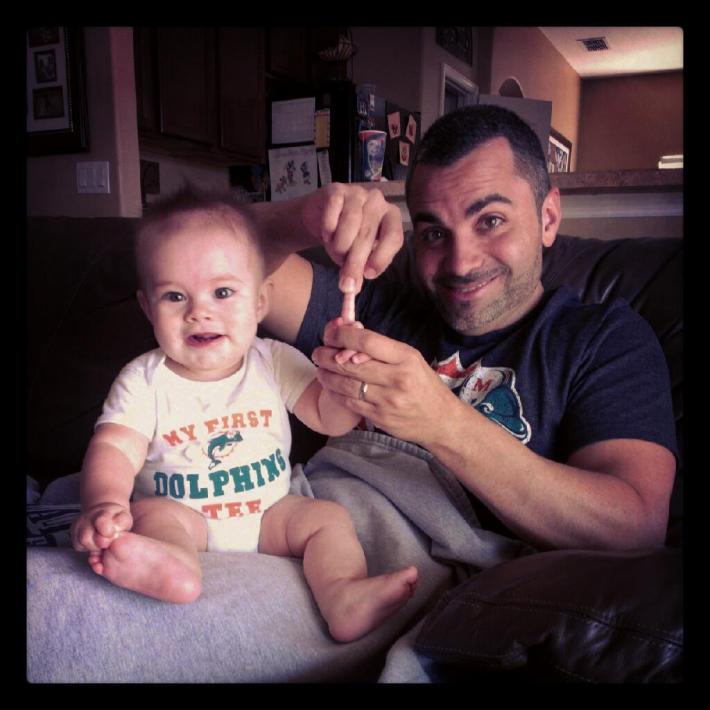 My husband is a HUGE sports lover. His two favorite things to watch on TV is football and basketball. I made the decision when we got married, to join him rather than fight him about it, even though I’m the kind of person that would rather play the sport than watch the sport. I might not scream at the TV like him but we dress up and support our team.

With that said, yesterday was Super Bowl Sunday. We went to church, grilled out, played football in the back yard with the kids and just enjoyed our day off as a family. When 6 o’clock came around the girls and I started cooking up some yummy snacks to munch on…creamy spinach dip with pumpernickel bread, fresh homemade salsa, fresh cut fruits and some warm yummy brownies (that was my snack choice). The first half of the game was fun, a little yelling and laughing, everyone was enjoying themselves. There were a couple of commercials that were not rated kid friendly, so the girls walked out of the room or closed their eyes. I was just waiting to see what the half time show was going to be all about, what was Beyonce going to do? I already knew it was something I wouldn’t want the girls to watch because of the songs she would be singing but I never even consider what she might be wearing or the way she would be dancing. Two seconds into the presentation, I had the girls go into a different room.

I have told others before that I’m a strict Mama. But it’s more than being strict, it’s about character, about values, about self worth. I have the honor of raising four beautiful children. Their minds have come to me pure and clean, ready to learn and thrive. They were not given to me to be tainted with impure thoughts and lust. Think with me about the saying a picture is worth more than a thousand words, WHAT PICTURES ARE WE LETTING OUR CHILDREN COLLECT IN THEIR MIND?

I’m starting a half time super bowl tradition next year, “Paper Football Zone”. Basically, you take a paper football and try to flick across a table into the uprights a person makes on the other end of a table or you could see who could flick the football the furthest. I have a year to plan it and I know it will not include sitting in front of the TV watching the “half time show!”

If you have a half time tradition, let me know. I would like to see what kind of fun I can come up with for the kids next year.

WHAT THE WORD SAYS:

1 Thessalonians 4:3-5 “For this is the will of God, your sanctification: that you abstain from sexual immorality; that each one of you know how to control his own body in holiness and honor, not in the passion of lust like the gentiles who do not know God;”

Matthew 5:28 “But I say to you that everyone who looks at a woman with lustful intent has already committed adultery with her in his heart.”

Romans 12:2 “Do not be conformed to this world, but be transformed by the renewal of your mind, that by testing you may discern what is the will of God, what is good and acceptable and perfect.”