Mark 16:15 “He said to them, “Go into all the world and preach the gospel to all creation.”

I have a younger brother named, Robert Martin. He began preaching at the age of fourteen! At that same time he gained a passionate addiction to missions and has spent time overseas every year since. He has been to Israel, Canada, England, Dominican Republic, Africa, Peru, and Vanuatu, to just name a few.

I wish I would have thought of this a long time ago when my brother started traveling as an evangelist, the girls and I would be experts in world geography.

This week he is in Springdale, Newfoundland, which is in Canada, so we are diving in to find out all about Newfoundland.

Springdale is a town in Newfoundland and Labrador, Canada, which had a population of 2,764 in the Canada 2006 Census. The community is located on the North-Western shores of Hall’s Bay, in Central Newfoundland, near the mouth of Indian River. Wikipedia

Newfoundland’s capital is St. John’s. In Springdale, it’s a rainy 42 degrees today. Even though it’s not that cold here in Orlando, FL, we are sharing in the rainy part. Their provincial bird is the Atlantic Puffin, their provincial flower is the Pitcher Plant.

I did a Google search for Newfoundland color sheets and found a great one on the Crayola website. 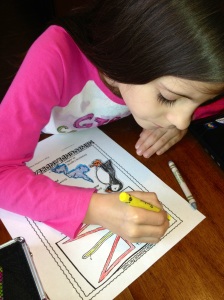 After learning a little about the province of Newfoundland, we took some time to pray for Uncle Robert and the people of Springdale. My hope is by researching the places Evangelist Robert Martin has traveled or is traveling to, will give the girls a heart for these different nations and an appreciation for the missionaries serving around the world. Who knows maybe one of them will have the call on their life one day, to bring the message to all the nations.

Matthew 28:19 “Therefore go and make disciples of all nations, baptizing them in the name of the Father and of the Son and of the Holy Spirit,”

2 thoughts on “Where in the World is Uncle Robert? – Newfoundland”